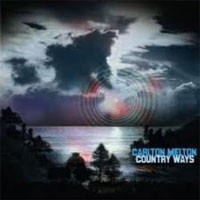 Unlike many of their contemporaries, White Hills, Wooden Ships, Cave, Steve Hillage, Bardo Pond, White Noise Sound etc. Carlton Melton are less concerned with the pulse, rhythm, and the groove, as they are with the SOUND, and the VIBE, weaving lush, expansive sprawls of FX drenched psychedelic ambience; drifting more often than driving, huge clouds of swirling wah guitars, and minimal spare drumming, existing more as a pulse, than a beat - the band drift weightless though swirling starlit sonic skies before the descent into trance inducing drones burrowing deep into the earth. Their sound - loose, free, abstract and ephemeral.

Carlton Melton have made two albums since they formed in 2008, and for several reasons these recordings are unique. For one, they were recorded in what is known as a geodesic dome in rural Mendocino County, north of San Francisco. These domes are typically large spherical buildings shaped like golf balls used as homes for the green-minded, greenhouses, theatres or whatever. Carlton Melton's dome is miles away from anywhere and is hollow. The place makes Bron Yr Aur look state-of-the-art, so unequipped to record music is it. Yet the band love it, and its ruggedness is there in the music. Their first album "Pass It On" released on vinyl in 2009 by Mid To late (the band's own label) was proclaimed by J Mascis as his favourite of the year.

Darryl says: Carlton Melton are the new avant-psyche gods!! Loose free-psyche vibes that float in cosmic abandonment, more abstract than the Shjips et all, but definitely drinking from the same acid drenched soup.