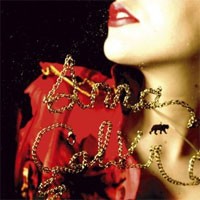 Ann Calvi’s debut for Domino is set to be one of the most talked about records of next year.

Brian Eno has championed her as the most visionary female artiste since Patti Smith, Nick Cave has just taken her out around Europe as special guest of Grinderman, and Rob Ellis (PJ Harvey’s right hand studio man) has produced the music.

An inspired guitarist influenced by Django Reinhardt as much as Jimi Hendrix, and with vocals inspired by Nina Simone and Mariah Callas, Anna Calvi’s music is a passionate and incredibly original mix.

The live shows with her permanent three piece band are already wowing audiences across the land.

Andy says: Ridiculously striking, powerful debut, seemingly from nowhere. If you like all the influences mentioned below, and throw in a bit of gothiness (now apparently ok to like and reference!?) and even early rock 'n'roll, then you're going to love this record.