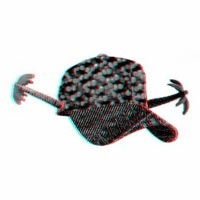 "Not one, but two songs, essentially epic in their succinctness. A 7-inch’d musical debut with a view (and an audible one at that), with its A-Side offering of ‘a life that’s moving too fast-track’, nimble on it’s Snide-winding feet and lyrically heralding a drum punctuated game of ingestible and acronym’d chemical keepie-up. An inaugural no’ that’s closely followed flipside by an east-coasting and bass city roller of a tune, one initially dominated by a ruddy and happy slapping bass guitar, artistically doodling and fluidly noodling away, not unlike the re-vivified ghost of a certain and funk-driven finger and thumbing Bobby Watson. 2 fine and finite examples of some altogether raucous and truncated brevity, with each track vocally Cruickshank’d by ‘The Rhythm’s’ North-Eastern and Full-Back to Frontman. Frenetically delivering 2 songs, ever so quickly, by First-Class-Post-punk; postally popping itself straight through our Bonjouring and Branching French-Letterbeatboxes. Zut alors!"
The Lonely Piper 2010