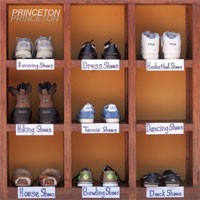 Princeton's "Shout It Out" from their debut full length album "Cocoon of Love" has been remixed by Samuel Bing of Fol Chen, synched in a Ford commercial, and is being released as this 7 inch single to coincide with their first European tour.

Laura says: There's still a hint of the afro rhythms here on "Shout It Out" despite it being much more low-key and mellow than their previous release. It's a well crafted pop song embellished with strings and nice little guitar flourishes.