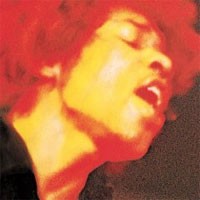 On "Electric Ladyland" Jimi Hendrix stretched and experimented in the studio, going beyond the power-trio format on what would be his last studio album with the Experience. "Electric Ladyland" was revolutionary in its scope and execution. Using New York City's Record Plant as a gateway to free expression, Hendrix traversed an abstract landscape containing compositions as weird and wonderful as "...And The Gods Made Love" and "1983...(A Merman I Should Turn To Be)".  Simultaneously looking forwards and backwards, Hendrix mixed in a song reminiscent of his time on the chitlin' circuit (Earl King's "Come On [Part 1]"), a Bob Dylan favourite ("All Along The Watchtower"), and one of his snappiest singles ("CrosstownTraffic"). Although Hendrix produced and wrote most of this masterpiece, others weighed in with their own contributions. Noel Redding penned "Little Miss Strange", and other guests such as Al Kooper and Buddy Miles showed up to play. Traffic's Steve Winwood and Jack Casady of Jefferson Airplane also made cameos, appearing on this classic album's spiritual centre, "Voodoo Chile (Slight Return)".