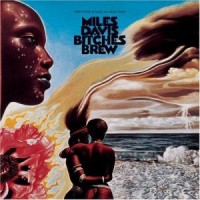 Miles marries Betty, gets the funk and this is the end result: Along with "Kind Of Blue", but coming from a completely different angle, "Bitches Brew" is probably Davis' most celebrated work. Recorded in three days in August of 1969 and often heralded as the first shot fired in the fusion movement, "Bitches Brew" melds jazz with rock, and as an essential part of any psyche-prog head's record collection as jazz fans. Davis had already spearheaded two major jazz movements (cool and modal jazz) and was about to initiate another major change (the album's cover also sports the phrase "Directions In Music By Miles Davis" above the title). Most of the musicians (Wayne Shorter, Joe Zawinul, Jack DeJohnette, Chick Corea ) who played on the album went on to become giants of the 1970s fusion movement, with "Bitches Brew" being the jump-of point. Artists as disparate as Carlos Santana, Joni Mitchell and Radiohead cite this epic long player as an influence.