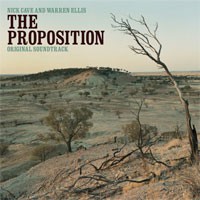 A powerful western drama set in the savage Eden of 1880s Australia; "The Proposition" is an elemental story of family conflict and primal violence, destructive love and divided loyalties. Featuring an international superstar cast including Guy Pearce, Ray Winstone, Emily Watson and Danny Huston, it is directed by John Hillcoat from a specially commissioned script by the globally acclaimed singer-songwriter Nick Cave. 'Because of Nick's narrative songwriting, the characters are so vivid,' says Hillcoat. 'I knew something really good would come out of it.' Cave has also composed the film's soundtrack in conjunction with Warren Ellis, his longtime Bad Seeds collaborator and multi-instrumentalist frontman of The Dirty Three. Incorporating soft chamber pieces, ghostly moodscapes and whispered laments, these 16 tracks are as starkly beautiful as the landscape of the film. Story and music are closely intertwined.