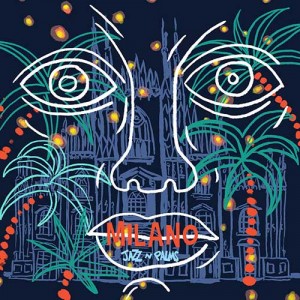 Hell Yeah is proud to present the return of Jazz N Palms with a superb new project following the success of his Ses Rodes album. 'Milano' as a 7" with radio and instrumental versions alongside an original video and expressive artwork by Parisian studio Nokko.

Jazz N Palms is a jazz-inspired project from Italian DJ and producer Riccio. He started this project after moving to Ibiza and falling under the spell of its ancestral side, its sweet and slow pace of life and the natural rhythms of the beauty in the north of the island. In summer, he served up his fantastic Ses Rodes double album which was dedicated to the original way of life that had remained almost unchanged till the early 80s party explosion.

This new track came about after Riccio heard Piera Martell's 1978 soul-jazz track 'Exotica' in a mix by Phil Mison. The idea was reimagine the song with new lyrics and set in Milan, in the early days when the town was invaded by unusual and exotic palm trees in Piazza Duomo. The song tells the story of a country teenager who is unsure about heading to a big new city after receiving an invitation. The story will retrieve familiar emotions for many of us who have faced similarly important decisions in our life, but this time married to an escapist groove.

For this release, the original 'Exotica' has been fully replayed by contemporary musicians from the multi-genre Italian ensemble 291out, with whom Riccio has worked in the past. It has new lyrics sung in Italian by fellow 291out collaborator Giovanna Lubjan after permission was given by original composer Salvo Ingrassia.

'Milano' is a luxurious soul-jazz fusion. It has exotic guitar lines and gently persuasive rhythms topped by the soaring vocal from Lubjan. A steamy sax helps the temperature rise as the track unfolds and traps you under its gorgeous spell.

This is a timeless package of blissed-out brilliance from Jazz N Palms.

A1. Original Mix
B1. Instrumental Mix