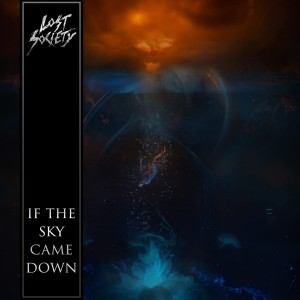 You got it right: over the last twelve adrenaline-filled years, braindead™ Finnish cannonball squad LOST SOCIETY has been fearlessly exploring the lights and shadows of the world of heavy metal. Still, despite the dirty deeds of the past years and the praise of legendary colleagues such as Kreator's Mille Petrozza and Sepultura's Andreas Kisser, it now feels like the band's rocket is just about to take off.

Enter 2022. The epochs of darkness have just been left behind...

LOST SOCIETY – featuring guitarist Arttu Lesonen, bassist Mirko Lehtinen and drummer Taz Fagerström as well – is about to unleash the most ambitious, versatile and innovative record of their career. Well, so far.

If The Sky Came Down is a bona fide example of what may happen when utterly talented musicians recognize the magnificent feeling: we are capable of reaching the heavy metal skies.

The definitive nail in the coffin is the record's spectacular closer Suffocating. There are cold shivers down the listener's spine as Samy Elbanna spits fragile but powerful lines such as "only death can heal me" and "the air is pure but I'm suffocating".

The lyrics may sometimes be secondary in the mystical realms of rock 'n' roll, but If The Sky Came Down heads out to another highway – and certainly not just within the unique serenity of aforementioned Suffocating.

And now the rockets are about to be launched again... What does the future look like?