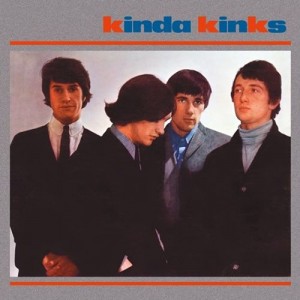 Kinda Kinks is the second album by English rock band the Kinks, released in 1965. Recorded and released within two weeks after returning from a tour in Asia.

The album is a huge step forward in songwriting capabilities for Ray Davies and the band. They secured themselves a number one spot on the UK singles chart with "Tired of Waiting for You", the full album charted at #3.

Originally released by Pye in the UK on 5 March 1965 and reissue now by BMG on heavy weight black vinyl in 2022. The US release had a rearranged track listing and repackaged cover. Several tracks were removed, and the single "Set Me Free", released two months after the UK issue of Kinda Kinks, was unique to the album's US release. In the UK, the album was only released in mono; no stereo mix was made.

The album also includes cult favourite tracks ‘Look For Me Baby’, ‘Come On Now’, ‘Something Better Beginning’ as well as "Nothin' in This World Can Stop Me Worryin' 'Bout That Girl" which put them right in the front of the British Invasion pack for seriousness and complexity, out in front of where the Beatles or almost any of the competition were in early 1965, but it didn't stop them from switching gears to the bluesy "Naggin' Woman."