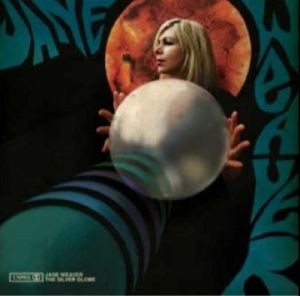 When a handful of broadsheet music columns and reputable blog pages began tomention the vaguely familiar name Jane Weaver in the ‘Here’s One We Missed’-themed features during 2014’s End Of Year round-ups, it became quickly apparent that the singer’s concept album,‘The Silver Globe’, had already independently garnered a ‘must have’ status amongst virtually any self respecting music buyers. But unlike so many other big label campaigns that vied for PR attention viaego-fuelled video promos and down your throat advertising, this unassuming, dedicated, focused piece of experimental female vocal pop was in no way spoon fed to editors nor playlisters. Nor did it fall within the lines of what might have been considered fashionable or culturally relevant.

‘The Silver Globe’ defied species, and for once, was judged on its own merit as a brilliant uncompromising pop record. The sixth album by a long-standing pillar of the North West music scene (loosely based on a lost Polish dystopian feature film and a French novella featuring a personnel of vintage Atari music composers next to Australian synth pioneers) was a simply typical product of the way Jane Weaver has always operated - as an independent and resilient female experimental songwriter, on her own label, on the outskirts of anything that resembles a music industry. Throughout her twenty-year career she has stayed focused, avoided whimsical fads and distractions and used her experience to work as hard as she can when she can. By Christmas ‘The Silver Globe’ had been announced as Piccadilly Records’ Best Album Of The Year, earned a Worldwide Top Ten Track Of The Year accolade by Gilles Peterson, gleaned across the board full-stars and thumbs up from the music press, benefitted unanimous repeat plays from virtually every specialist DJ on 6 Music (amongst many more global radio stations), found DJ mix support from Andrew Weatherall, and filled most of the pages in a twelve month diary with gig and festival requests. Meanwhile, Jane’s own BirdImprint (via Finders Keepers) had to worked around the clock to keep up with stock demands of her new (and old) music. Album collaborators such as David Holmes, Andy Votel and BC Camplight shared gushing pride in the project and with this unanimous critical support (and long earned respect) Jane reacted in the only way she knows best - to keep creating.

Andy says: An incredible album, a concept album, a whole world of dreams, a portal. With analogue synths, Krautrock grooves, strange wonky disco and whispy, dislocated folk, Jane created a world of sound you couldn't help but fall in love with and ultimately lose yourself in. The song-writing is top notch, the production incredible, the artwork absolutely beautiful. Everything is perfect about this record.