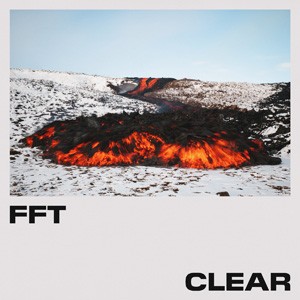 Debut album by FFT, the result of three years of focused writing and programming by the London-based producer, ‘Clear’ is deeply psychedelic, defined by a mature sense of melody and structures crafted at a monumental scale.

Though FFT has previously released a handful of tracks under various names, it wasn’t until 2017’s ‘FFT1’ EP on the Uncertainty Principle label that his production talents began to fuse into a distinct and personal style, especially evident in FFT’s ‘Regional/Loss’ EP on The Trilogy Tapes in 2019, multiple releases on Bruk Records and 2021’s ‘Disturb Roqe’ also released on Numbers. Through it all, FFT has mastered a complex sense of mood catalyzed by sound itself: He builds patches and presets from scratch, and feels these synths and software have their own objectives and reactions, creating a kind of compositional feedback loop.The result is an album that brings to mind a collision of electronic pioneers like Delia Derbyshire and Bernard Parmegiani, 2000’s braindance, the Maximized wares of an OPN or Objekt and the rough rhythmatics of SND or Mika Vainio

The layering of sonic elements and intentions is starkly audible across these nine tracks. They can be seismically concussive and grandiose, but granular and fluid - echoing the Icelandic volcanic eruption that features in the artwork photography by George Cowan. ‘Clear (Eight-Circuit Mix)’sets a euphoric tone immediately accelerated by the jagged sounds and vocal textures of ‘Redeemer’. ‘3 Sided’ channels hyper-urbanity from its almost entirely analogue palette, and by contrast ‘Disturb Roqe 2’ is bracingly digital, gyrating in random cycles between clustered percussion, metallic splinters of audio and artificial vocal tics.

Opening side two, ‘You’ve Changed’ adheres to a more abrasive core, while ‘Heal’ and ‘Heal (Alt Mix)’evolved out of linked pieces in FFT’s live sets that grew into complete tracks in the months before Covid-19. The significant intensity of ‘Heal’ in particular was refined during strobe-heavy live performances and is the album at its most turbulent, the claustrophobia interrupted by dazzling arpeggios. The overall impact of 'Clear' is cinematic and precise, marking the arrival of an impressive electronic musician who is not new but has come into his own as a fully developed artist