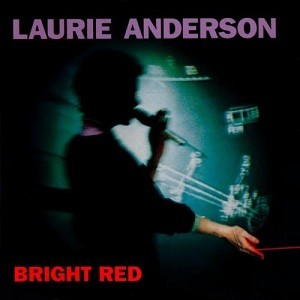 Five years after the release of 1989’s pop-oriented album Strange Angels, Laurie Anderson followed up with the avant-garde concept album Bright Red, a Brian Eno production exploring much darker territory. Eno also co-wrote four tracks; “The Puppet Motel”, “Muddy River”, “Poison” and “Tightrope”. For the recordings, Anderson was supported by Adrian Belew, who provided guitars on several tracks. Belew is best known as the lead vocalist and guitarist of King Crimson. During the time of the recording of Bright Red, Laurie Anderson and Lou Reed just started dating. They collaborated on a number of recordings together, including the duet “In Our Sleep”, that is featured on Bright Red.