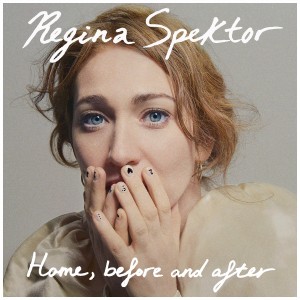 ‘Home, before and after’ is Spektor at her most inspired and opens with the recently released ‘Becoming All Alone’, a surrealist ballad with a majestically swelling arrangement that comes alive. The album possesses her most palpable New York atmosphere in years, which is fitting as it was recorded in upstate New York, where it was produced by John Congleton and co-produced by Spektor.

The Russian-Jewish-American singer, songwriter and pianist first achieved commercial success with the RIAA Gold-certified breakthrough ‘Begin To Hope’, which included the singles ‘Fidelity’, ‘On The Radio’, ‘Better’ and ‘Samson’. Spektor’s fifth and sixth albums ‘Far’ (2009) and ‘What We Saw From The Cheap Seats’ (2012) both debuted at #3 on the Billboard album chart. She has performed at The White House as well as on Broadway and Saturday Night Live, and has contributed to many projects spanning film, television, and music including ‘The Hamilton Mixtape’.

Regina SpektorRemember Us To Life