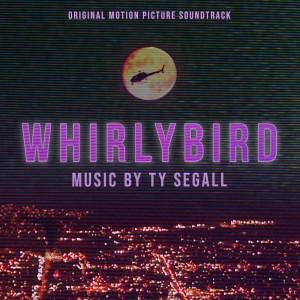 Released to great acclaim in Summer 2021, Whirlybird tells the story of Zoey Tur and Marika Gerrard, former partners and founders of the Los Angeles News Service, and deftly tracks their extraordinary and often-reckless pursuit of breaking news throughout the 80s and 90s — a time in which they pioneered the use of a helicopter to report on Los Angeles at its most chaotic, capturing historical moments like the 1992 riots and the O.J. Simpson slow speed pursuit.

Through striking interviews and one-of-a-kind archival footage,Yoka’s documentary expertly tells the story of Zoey and Marika’s unraveling marriage as they singlehandededly changed broadcast news forever. These two arcs intertwine to create an electric view of the encroaching intensities of that era, when the 24-hour news cycle first rose up to dominate our national consciousness.

Ty Segall has previously scored scenes and interstitial bits for film and video things here and there — but this is his first full-on feature film score, a work done in collaboration with the director, whose friendship and creative partnership with Ty has grown over a decade-plus of music videos and other projects. Working off notes and feels from Matt and responding to the images and story on screen, Ty crafted some of his most creative arrangements to date, using synth, drum machine, Wurlitzer keyboard, guitars, drums and percussion (plus saxes played by Mikal Cronin, who also cowrote the title track with Ty) to articulate a multitude of tones running through the film. For a shape-shifter like Ty, this apex of tone color is no mean feat, an achievement further highlighted by the full set of pieces. Rather than simply throw a bunch of songs-with-singing at the project, Ty’s score perfectly epitomizes the film’s ethos, providing an instrumental counterpart that dialogues with and helps frame the film’s provocative themes and images.

As both Matt and Ty are natives to the Southern Californian milieu, particularly the era Whirlybird depicts, their collaboration involved a journey through their past. In realizing the music, they revisited their own Los Angeles awakenings, adding another personal layer to the deeply felt meditations and elegies sighted by the remarkable Whirlybird — now an equally thrilling counterpart to be experienced through the original soundtrack.