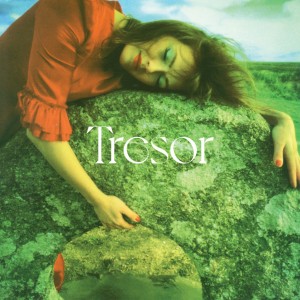 Tresor (Treasure) is Gwenno Saunders’ third full length solo album and the second almost entirely in Cornish (Kernewek). Written in St. Ives, Cornwall, just prior to the Covid lockdowns of 2020 and completed at home in Cardiff during the pandemic along with her co-producer and musical collaborator, Rhys Edwards, Tresor reveals an introspective focus on home and self, a prescient work echoing the isolation and retreat that has been a central, global shared experience over the past two years.

Tresor diverges from the stark themes of technological alienation in Y Dydd Olaf (The Final Day) and the meditations on the idea of the homeland on the slyly infectious Le Kov (The Place of Memory). Accessible and international in outlook, peppered with moments of offbeat humour, Le Kov presented Cornish to the world. The impact of Le Kov was resounding, providing for the Cornish language an unprecedented international platform that saw Gwenno touring and headlining in Europe and Australia, and supporting acts such as Suede and the Manic Street Preachers. Her performance of ‘Tir ha Mor’ on Later with Jools Hollandwas a triumph, and the album prompted wider conversations on the state of the Cornish language with Michael Portillo, Jon Snow, and Nina Nannar. After Le Kov, interest in learning Cornish hit an all-time high, and the cultural role of the language was firmly in the spotlight.

On Tresor, Gwenno shifts focus from the external to the internal, and onto the journey of rediscovering oneself after the life-changing experience of becoming a mother. It is an exploration of desire, of reclaiming one's body after childbirth, of working out how to exist as yourself as well as caring first and foremost for somebody else. Inspired by powerful woman writers and artists such as Ithell Colquhoun, the Cornish language poet Phoebe Proctor, Maya Deren and Monica Sjöö, Tresor is an intimate view of the feminine interior experience, of domesticity and desire, a rare glimmer of life lived in and expressed through Cornish. Tresor evokes the waters that shape the Cornish experience, whilst being musically far reaching with influences spanning from Ryuichi Sakamoto to Eden Ahbez and William Basinski. As psychedelically tinged as her previous work, Tresor embeds found sounds ranging from Venice to Vienna, layering cultural and historical atmospheres, decoupling the use of Cornish from any geographic determinism, allowing for an expression of imaginative spaces that are truly free.

It recalls the waters of the unconscious, the undulating elemental tides suggesting emotion, intuition, those features long associated with the archetypal anima. In “Anima” Gwenno asks how do we fully inhabit different parts of the self, acknowledging convergent cultural and personal histories, embracing the shadow. She explores how the power of the feminine voice inspired by the Cornish landscape asserts itself in presenting a richly melodic counterpoint to a place and people known for rugged survival and jagged edges. The title track “Tresor” (Treasure) confronts the contradictions that come with visibility as a woman and the challenges of wielding women’s power. “Tonnow” (Waves) shows the watery depths of woman’s desire and knowing, an invitation to liberation. The Welsh language track, “NY.C.A.W.” (Nid yw Cymru ar Werth - Wales is not for Sale) widens the frame outward from the personal to the collective, condemning our neoliberalist thinking and our growing passiveness to late capitalism. The album also includes the track “Kan Me” (May Song), written for “Bait” director Mark Jenkin’s new film “Enys Men”, which is scheduled for release this summer.

Tresor the film, is inspired by surrealist filmmakers such as Sergei Parajanov, Agnes Varda, and Alejandro Jodorowsky, and reflects Gwenno’s growing interest in film and the intersection of music with visual components. Filmed in Wales and Cornwall, Tresor evokes a dreamworld from another time, surreal, and sensual, saturated with light and colour.

Although Tresor is a project birthed from introspection and intimacy, the implications of the messages are much broader. Ultimately Gwenno is asking what are other ways of understanding and being in relation to one's self and to one another? What are our roles in both shaping and being shaped by the cultures we move in, in a world that is ever changing, and where we all have a place? Tresor does not provide easy answers, for Gwenno shows us that we exist in paradox, our threads of place and story entwined like knotwork, our many selves shining as beautiful entanglements.

Andy says: Gwenno's third album and second sung entirely in Cornish is her most mesmerising and hypnotic offering yet. Almost glacial and thoroughly other-worldly, this LP casts its magic spell from the first track to the last. It's so beautiful.