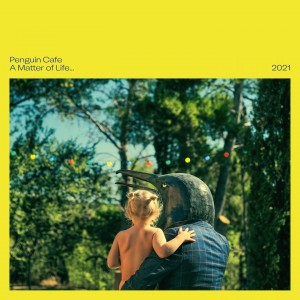 Penguin Cafe are back with a lovingly produced 10th anniversary reissue of their debut album, titled A Matter of Life… 2021. Besides being completely remastered and pressed on vinyl for the very first time, the record also features a brand new 2021 recording of lead single Harry Piers, a song commemorating Arthur Jeffes’ late father and Penguin Cafe Orchestra founder Simon Jeffes.

“I originally wrote Harry Piers to play at my dad‘s memorial service 24 years ago, and I played it at the end of pretty much every gig (and soundcheck) we’ve done since, so I’ve probably played it hundreds if not thousands of times since we originally released A Matter of Life... So when we decided to reissue the album, Robert and I both felt it would be fun to record an up-to-date version of this song, because it has changed over time and it continues to evolve. So while this is still very much the same tune, I think it has a lot more nuance and detail that reflect the years that have passed since 2011,” Arthur explains.

A Matter of Life… 2021 is a chance for a classic example of the beauty that’s found in collaboration to reach fresh ears, and an opportunity to breathe new life into fan favourites. The album, performed by a mix of personalities — including Neil Codling of Suede and, on percussion, Cass Browne of Gorillaz — incorporates the aesthetics of the original PCO, seasoned into a confident and redefined style, maintaining that quintessentially English sound, but adding a fresh direction and a sense that they are evolving into something new and very much their own.

Arthur says “it’s been really lovely to come back to these old friends — and with this re-issue we’ll be bringing them all out to play live again. Now four albums on, and with our new home at Erased Tapes, it makes a lot of sense for us to go back and pull this record out and brush it off for today”.

The cover artwork also received an update in the shape of a beautiful photograph taken by the UK photographer and long-time collaborator Alex Kozobolis, who was sent to visit Arthur in his second home in Tuscany. Raths’ concept for this was to not only reenact the original painting by Emily Young, but to express the generational change by putting Arthur and his daughter in place of the little boy and the emperor penguin figure that suggest father and son.