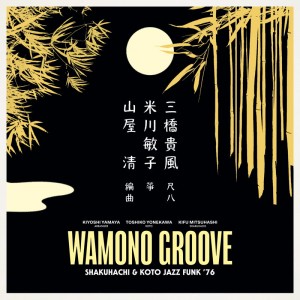 Born in 1932 in Tokyo, Kiyoshi Yamaya started his musical career in 1953 when he played in various jazz bands in town. In 1957, Yamaya joined Nobuo Hara's famous jazz big band Sharps & Flats as a baritone saxophone player and started composing, arranging, and recording for them and other big bands. He became a key jazz figure in Japan in the sixties together with Norio Maeda and Keitaro Miho, both jazz pianists, composers and arrangers, by forming the Modern Jazz Three Association – which aimed at improving the level of Japanese jazz composition and arrangement. In the mid-seventies, his Contemporary Sound Orchestra explored jazz funk fusions with traditional Japanese melodies and instruments such as the shakuhachi, koto, biwa, and shamisen. These works were recorded for a series of panoramic Japanese albums released domestically on Denon and Nippon Columbia, from which the tracks on this compilation are taken from.

Toshiko Yonekawa, born 1913 in the city of Himeji, not so far from Osaka, is the eldest daughter of koto and shamisen master Kin'o Yonekawa. She started studying both instruments with her talented father from the age of 3, played in her first concert at 8, and was only 12 years old when she first appeared on national radio. Her unique style of koto playing is widely recognized due to the extreme accuracy of the intonation and rhythm, as well as the unequaled beauty of the instrument's sonority. After a life decorated with awards and prizes, Toshiko Yonekawa was named a Living National Treasure in 1996.

Born in Tokyo in 1950, Kifu Mitsuhashi is a great master of Koto style shakuhachi. After completing the NHK Hōgaku Training Program in 1972, Mitsuhashi became a member of Pro Musica Nipponia, a group of leading composers and top-ranking musicians devoted to performing a wide-ranging repertoire of classical and contemporary compositions from both Japan and the West – in which all music is performed by traditional Japanese musical instruments. Mitsuhashi has toured the world for hundreds of recitals, also as a soloist, and has performed his art with the greatest ensembles such as the BBC Symphony Orchestra and the Berliner Philharmoniker. In 2020, Kifu Mitsuhashi was awarded the Order of the Rising Sun.