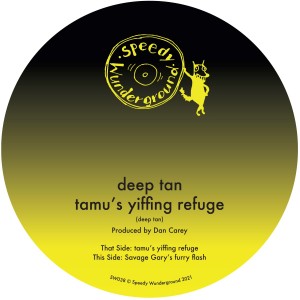 Part of the city’s thriving post-punk scene, deep tan make music that draws on the traditions of postpunk and new wave but with a distinctly modern take on the genres. Their stripped-back, minimal sound is a vehicle for songs that engage with contemporary themes, from deepfake revenge pornography to quarantine drinking sessions.

Shedding the atmospherics of earlier releases in favour of a darker, more driving sound, this evolution is developed further on their most recent EP, ‘creeping speedwells’, which expanded the band’s range to include psych textures and German experimental elements.

On the provocatively titled ‘tamu’s yiffing refuge’ the band explain ‘it’s a story of furry lust. A furries convention has hit town and at an afterparty at a nearby hotel (hosted by tamu himself) there are scenes of unbridled hedonism unmatched since the days of Freddie Mercury’s legendary parties at New Orleans’ Fairmont Hotel. The track was recorded to tape at Dan Carey’s South London studio with some very welcome additions, including percussive elements, custom-built drum fortress and a mind-bending swarmatron.’
For the uninformed minority – furries are a community of people who dress up in animal costumes as a hobby who meet up IRL and online as their ‘fursonas’. All clear so far.

The resulting track is probably one of Speedy’s most stripped back affairs so far but no less compelling. Taut, seductive and enthralling – it channels legendary indie heroes like The Slits, Young Marble Giants and The Raincoats with influences from contemporaries and peers like Jessica Winter and Dry Cleaning to create something that is undeniably their own.

And you can’t say fur-rer than that.