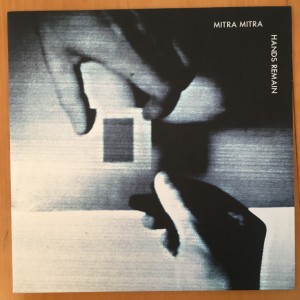 A new year kicks off at Polytechnic Youth HQ, and it’s with an absolute beauty with which they re-enter the fray. The first new MITRA MITRA full length since 2018’s hugely well received “Marionettes” set (also on PY).

The band was formed in Vienna in late 2014 by Violet Candide and Mahk Rumbae. Originally from New Zealand, Violet Candide has been a fixture of the Vienna post-punk and minimal synth scene for many years as a DJ before making music with Mitra Mitra and her other projects Slow Glass (with Bobby from Low Sea), Peppy Pep Pepper and Violetiger. Whilst British musician Mahk Rumbae is known for his work as a member of the industrial/experimental project Konstruktivists, Oppenheimer MkII (with Andy Oppenheimer of Oppenheimer Analysis) and his solo techno project Codex Empire.

After working together on one of Violet’s solo songs, the pair decided to continue writing and working together as Mitra Mitra, with the aim of writing electronic songs not tied by any particular influence or style – but combining elements of synth pop, electro and minimal synth to create a modern take on classic period electronic music.

Despite initial plans involving studio only work, the band were persuaded to take to the stage in 2015 and have since played shows in England, Germany, Belgium, Hungary and their adopted home country of Austria; quickly gaining a reputation for their unique presentation and interaction with the audience.

The new LP is their strongest set yet; 'Hands Remain' is perhaps darker in nature than previous MM releases; although mostly completed before the pandemic, it somehow fits the times we live in now…

The sleeve design is based on a work by Canadian artist/filmmaker Michael Snow, who kindly gave permission for a processed version of his image to be used on the cover. A wonderful 12 track collection hugely recommended to fans of classic era synth pop, early Mute, Cherry Red, Blackwing Studios etc etc…. One time pressing available now!

Javi says: Plug a fembot into a Moog, and you get Mitra Mitra's 'Hands Remain', a Polytechnic Youth gem caught between Spacer Woman boogie and Moonlandingz grim-pop. These are some synth-ridden end-of-the-world anthems, custom built for fans of yesteryear's German dancefloors - and the price tag ist ziemlich gut too!