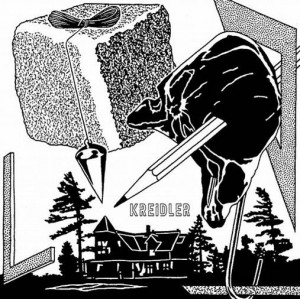 In September 2020 the band met for exploratory sessions and initial recordings in Düsseldorf, in the familiar settings of the Kabawil Theater. That already has a certain tradition. The impetus this time was a solitary gig in the conspicuously spacious surroundings of the (former) Philipshalle. In a year that threw everyone back on themselves. Over the winter Kreidler worked remotely, sifting through the material, arranging the pieces, adding textures and contours. They met again in the spring of 2021 for further recordings at the Uhrwerk Orange studio in Hilden, near Düsseldorf. That, too, has a certain tradition.

From fifteen pieces they filtered out ten, and thus held an album in their hands. Then – and this is new – they took it to London, to Peter Walsh, so that he could mix the tracks.

Daubs are in no doubt here. This is a tenfold of colourful-blotches-thrown-onto-canvas. Then a stepping back, contemplating, remixing paint, layering, overlaying, scraping free again elsewhere. And these spells are not devastating curses, rather they are enchanting incantations, a calling forth a spring without having to ban winter in a sombre masks. Spells And Daubs is a melodious interplay. Not that Kreidler neglect the rhythmic; their characteristic drive runs through all the pieces on Spells And Daubs. Perhaps it's like this: The beat is musicalised, the melody rhythmitised.

Spells And Daubs is like a collection of short stories. Its ten pieces explore the same space drawn together by an overlaying arc. All of them have the length of a single, and each one has the potential of a single in the way the arrangements are laid out – so enticing is the melodic line and the beat. This succinctness was perhaps last heard on the 2000 eponymous Kreidler album. The drums are powerful with a light swing. The bass alternates beyond its functionality and its indicator just of the low frequency, swoops up and takes over the melodic lead. Perhaps most beautiful in the irresistible pop gems Arena, Unframed Drawings, and Revery. Aptly Alex Paulick moved to the fretless Bass – conjuring the spirit of Mick Karn.

For all of their Krautrock attributions, Kreidler never tire of reminding us that their musical development stemmed form a love of British pop music. So you might say the co-op with Peter Walsh is a match made in heaven. His illustrious mixing and production skills have lifted works from Shalamar or Lynx to Heaven 17 to Scott Walker, Pulp or FKA Twigs into other spheres. Kreidler had previously collaborated with him in 2013 for two tracks (Snowblind, Escaped, BB169). On Spells And Daubs, Walsh's methods and magic are especially audible in the spatial production, with his hallmark blend of depth and punch. Spells And Daubs is wrapped up in an enigmatic black-and-white drawing by prolific artist and filmmaker Heinz Emigholz from his Basis of Make-Up series. Their ongoing collaboration feels like a constant now. The mutual interference of Heinz Emigholz's and Kreidler's universes started about ten years ago, when he expanded the album Den with seven videos.