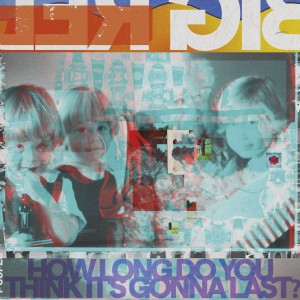 Ever since childhood, learning to play various instruments in a suburban Cincinnati basement alongside his brother Bryce, Aaron Dessner has consistently sought an emotional outlet and deep human connection through music — be it as a primary songwriter in The National, a founder and architect of beloved collaboration-driven music festivals, or collaborator on two critically acclaimed and chart-topping Taylor Swift albums recorded in complete pandemic-era isolation at his Long Pond Studio in upstate New York, among many other projects. Through it all, Dessner has brought together an unlikely community of musicians that share his impulse to connect, celebrate and, most of all, process emotion and experience through music. This generous spirit and desire to push music forward has never been more deeply felt than on Big Red Machine’s “How Long Do You Think It’s Gonna Last?,” the second album from Dessner’s evermorphing project with Bon Iver’s Justin Vernon. In 2008, while assembling material for the charity compilation “Dark Was the Night,” Dessner sent Vernon a song sketch titled “big red machine”. Vernon interpreted “big red machine” as a beating heart and finished the song accordingly — a metaphor Dessner says “still sticks with me today.

This project goes to many places and is always on some level about experimentation, but it shines a light on why I make music in the first place, which is an emotional need. It’s one of my therapies and one of the ways I interrogate the past.” Released in 2018, Big Red Machine’s self-titled debut album evolved from improvisation and what Dessner calls “structured experimentalism,” with an ear toward building tracks that would work well in a live setting alongside visual elements. When Dessner and Vernon started the Eaux Claires Music Festival in 2015, they staged the original “Big Red Machine” as an improvisation-based performance piece. They later took that show to the PEOPLE collective’s Berlin residency and festival, and to Dessner’s Haven Festival in Copenhagen. “Big Red Machine started as this thing we would do for fun, and we fell in love with the feeling of it,” says Dessner.” Vernon agrees: “I remember it feeling really easy, but we never knew what would happen. It was exciting. As time went on, we just kept doing things together. And our friendship has grown strong, alongside all the collaborative stuff.”

Barry says: It won't be a gigantic surprise i'm sure, to hear that Big Red Machine's newest LP is as stunningly accomplished and wonderfully listenable as it's long list of collaborators would suggest. Brimming with beautiful folk charm and uncompromising melodic direction, there's very few people who wouldn't find something to enjoy here.