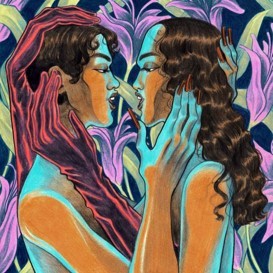 Opening with the groovy yet ethereal "Trust A Little Bit" - seared with soulful auto-tune and huge harmonies - we move into the anthemic boom-slap of "Summer Ride" which has vintage Outkast vibes beamed via a hologram of Justin Timberlake. It's clear that Blanco's hear is in big tunes that fill the room.

Elsewhere we get drank-fueled, slo-mo RnB, cut with trap beats and rich with FaltyDL's glassy, refracted production aesthetic. Somehow perfectly bridging the gap between pop and RnB's hooky ephemera, gritty street rap and the overwhelming stimulus of bass music and future beats. There's some quirky, idiosyncratic skits that tie tracks together that really, you're only gonna dig if you follow the artist's whole social profile (that's followers grandad - Ed) but they do provide some light yet beautifully timed, and sometimes comedic relief between the attitude-riddled songs that pepper the album.