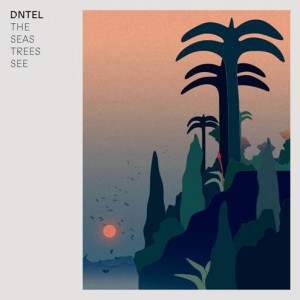 Hailing from Los Angeles, Jimmy Tamborello has been a key figure in refining what today is considered electronica for over 20 years. "The Seas Trees See" is the first of two Dntel albums to be released in 2021 by Morr Music in collaboration with Les Albums Claus: a free-floating and rather loose stroke of musical genius, giving ambience a whole new meaningful context. It combines crackles and hiss with deep, yet modest, synths and poignant, yet elegant, vocals and lyrics.

"Away", its counterpart album, will follow later in 2021. It will showcase Dntel's unapologetic love for pop music from a long-gone era, presenting yet another aspect of his multi-faceted personality. Dntel has always covered many musical grounds - from the pop-infused hits on "Life Is Full Of Possibilities" (Plug Research, 2001) to his much more abstract works on "Aimlessness" (Pampa Records, 2012), "Human Voice" (Leaving Records, 2014), and his electronics for The Postal Service (Sub Pop). Whatever his style - Tamborello has retained his very own musical voice. When it comes to producing music, it can be a good idea to get away from the studio and find a more relaxed environment. Inspiration does not necessarily require huge bass bins. Fewer pieces of gear make it easier to really focus on ideas first and let them be. After recording "Hate In My Heart" - his most recent album, released in 2018 - this way, Tamborello continued working in that fashion, mainly jamming and getting ideas together for upcoming live shows. One of the first results of this creative process was the opening track of "The Seas Trees See" - a cover version of "The Lilac and the Apple", originally recorded by Californian folk singer Kate Wolf in 1977. Tamborello turns the acapella song into a vocoder-like extravaganza.


Working with the original recording, the track perfectly sets the tone for what "The Seas Trees See" turns out to be - a quiet yet mesmerizing journey through sound and emotion, bringing together his very own sound design, disguised samples and an incredible feel for moods and atmospheres. "I thought a lot about making an album that you would find in a thrift store", Tamborello remembers. Something "like a mysterious collection of sketches that leaves a lot unanswered. It doesn't beg for attention or have any big moments." Despite its perfect and gentle flow, it is worth digging deeper, to surrender oneself to all the painstakingly placed details.


Whether the beautiful and haunting piano work on "Movie Tears" or the almost sidechained-sounding "Yoga App" - every aspect of this album has been beautifully crafted, often bringing one of life's biggest questions to the table: What if? What would have happened if Tamborello would have done this on that track or that on this track? It is good that he did not. Small things add up to something great, diverse and riveting. The subtlety of his latest endeavor is fascinating. It opens up a new world, in which small musical sketches mean at least as much as perfectly produced pop anthems - if not more.