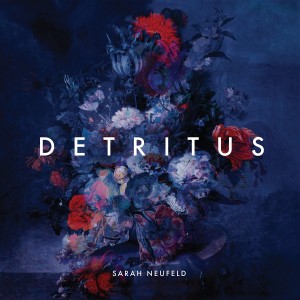 Composer and violinist Sarah Neufeld is a career-long touring and recording member of Arcade Fire. Her third solo LP ‘Detritus’, confronts anguish with beauty, turmoil with grace, gliding through the present like a dancer mid-motion, reaching through space 'til she's caught.

The album is wistful and emotive, and carries the listener on a journey of euphoric and complex looped violin dusted with mesmeric melody recall. Openers ‘Stories’ and ‘Unreflected’ lead with atmospheric ease, sombre soundscapes and distant, otherworldly vocals. ‘With Love And Blindness’ ups the tempo with remote, dreamlike rhythms that hypnotise and enthrall. ‘The Top’ is elated, but it highlights the isolated strings and poetic loneliness Neufeld is able to convey with them. ‘Tumble Down The Undecided’ and ‘Shed Your Heart’ are climatic in their delivery, full of cascading notes and delays before closer ‘Detritus’ exits with a state of calm, easing back into the shadows and taking with it the vivid textures and images crafted with infinite grace over the course of the album.

NOTES ABOUT DETRITUS
I composed this album within a larger body of work that was commissioned as a live soundtrack for Peggy Baker Dance Project’s Who We Are In The Dark.

Who We Are In The Dark is a collaboration originating in 2015 when Peggy Baker (legendary Canadian dancer and choreographer) and I were asked to perform a duet together at Fall For Dance North. Peggy chose to choreograph to my piece From Our Animal from my (then) upcoming second album, The Ridge.
Wanting to create something personal for her for this performance, I composed a prelude which began with the words “who we are in the dark”.

There was something utterly compelling about working and performing together.
Coming from different generations (Baker is now 68), we share a sense of intensity, curiosity, and ferocity.
Shortly after our debut performance together, Peggy commissioned me to collaborate with her on a full scale piece for her company. I began composing for this project in 2017, with the solo violin piece, The Top.
Peggy and I were exploring themes of darkness- her take often lived in the macro, universal elements, space, death, while my own exploration at the time was more close up- intimacy and the ego self. I think there was an invisible thread between us from our own experiences of loss and grief.
To say the least, this collaboration and the work we produced has held tremendous meaning for both of us.

Drummer and composer Jeremy Gara (Arcade Fire) joined the collaboration in 2018, adding percussive and harmonic depth to my solo compositions, as well as inputting his own signature style of ambient noise composition and heavy, gripping drumming into the live score.
The work premiered in February 2019 and toured internationally throughout the year, with our most recent performance in Den Hague at Holland Dance Festival in February 2020.

I began distilling the solo compositions into a smaller, album length body of work in the Summer of 2019, experimenting live with solo versions, adding more vocals, and incorporating foot pedal bass synth to my solo live capabilities. This body of work stood out for me, as a further push and refinement of the composition style I’ve been developing for the past 8 years, and as a marker of an intense and difficult passage in my own life.

1. Stories
2. Unreflected
3. With Love And Blindness
4. The Top
5. Tumble Down The Undecided
6. Shed Your Dear Heart
7. Detritus