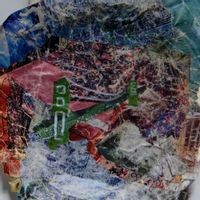 Animal Collective present the physical release for ‘Bridge To Quiet’, out on Domino.

The band took some of their unreleased improvisations, remixed them, collaged them and built them into fully formed songs, finding their way to ‘Bridge To Quiet’.

Animal Collective consists of musicians Avey Tare (David Portner), Panda Bear (Noah Lennox), Deakin (Josh Dibb) and Geologist (Brian Weitz), who play in various configurations on each album. Their expansive catalogue spans the entirety of the 2000s, including ‘Strawberry Jam’, ‘Feels’ and ‘Sung Tongs’. With the release of ‘Merriweather Post Pavilion’, named after the Baltimore venue, they established themselves as one of the most acclaimed acts of the 21st Century.