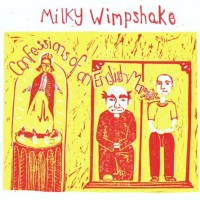 Referred to by some as punk folk and twee skiffle, they're considered witty, satirical, and both irritating and utterly enjoyable, Newcastle Upon Tyne based cult indie-pop heroes Milky Wimpshake have released numerous singles and compilation tracks on assorted indie labels since forming in 1993.

This is their first album since 2015, first one for the Spanish label Bobo Integral. 'Confessions Of An English Marxist' will provide the usual brilliant lyrics, full of references to pop culture, class struggle, and love, plus infectious indie punk tunes. Welcome back, Milky Wimpshake!

"A slow birth! At least one song on this album was written when 'Dave' Cameron (remember him?) was prime minister, hence a nod to bestiality on one track. Oh yeah, and then bloody Brexit happened, blimey, that didn't escape anyone's attention did it? And now this album finalised at a time of global pandemic, ha! This predicament meant that a working title of 'The Wimps are Alright' had to be abandoned (possibly to be revived later). There's a few confessions on this album, but not enough confessions of guilt perhaps - I'll get there." - Pete Dale about 'Confessions Of An English Marxist'

Milky Wimpshake began their under-the-radar run in the early '90s to investigate daydreamy sentiments and D.I.Y. takes on sociopolitical protest songs. Working at an extremely relaxed pace, Milky Wimpshake's discography exists in piecemeal compilation appearances, long out of print 7" singles, and a scant seven albums stretched out over the course of more than 25 years.

'Confessions Of An English Marxist' is one of their best albums to date, these are songs that say more about today's world than most of the written media. Fuck art, let's danse!

SIDE A
A1. Capitalism Is A Perversion
A2. I Just Can't Escape From Myself
A3. You Make A Nice Piece Of Art
A4. Leicester Square (You Stopped My Time)
A5. Fuck Art, Let's Danse
A6. I Don't Wanna Work
A7. King Of Clubs

SIDE B
B1. Hospital Coffee
B2. Vignette
B3. Welcome To Fascist Britain
B4. Wanna Marry?
B5. No War (But The Class War)
B6. Chester Brown
B7. Written By Hand
B8. I Don't Wanna Go There