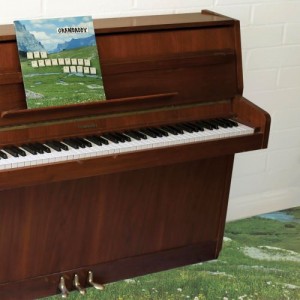 Jason Lytle set up a new plan when he decided to re-record the songs from Grandaddy’s “The Sophtware Slump.” Twenty years ago he made this ageless record while red-eyed and running around a sweltering slipshod home studio in his boxers using some gear he planned to return to Best Buy as soon as he was done. For this new, piano-centric “The Sophtware Slump,” Lytle traveled around Los Angeles, sourcing studios and pianos like a master chef selects foods from a farmer’s market. He identified three instruments and three studios that would suffice. Everything was in place. As with many best-laid plans, his were scuttled. In this case by a pandemic. So two decades after making a DIY masterpiece, Lytle found himself recording those songs again, sweating in his apartment again, trying to create a controlled environment while surrounded by chaos.

“I wrote a list of things I had to work around here,” he says. “Traffic. Pretty strong from 8-10, commute times. Then 2 to 5. Helicopters, garbage trucks, weed whackers, lawnmowers, leaf blowers, motorcycles that inevitably always drive by during the middle of a take, sports cars, lots of fancy luxury sedans with no mufflers, parrots.”

So unlike the old days where the coming and going of birds could be electronically punched in, Lytle 20 years after “The Sophtware Slump” found live birds willing to contribute to his album, and at no cost.

He laughs at the challenge of reinventing the album. Twenty years bought him no new comforts.

“Because of the pandemic, all of the sudden, I was looking at a real deadline to make the damn thing,” he says. “Here we go, just like the old days. If you want something done right, you gotta do it yourself.

“Not that much has changed.”

Yet many things have changed since Grandaddy issued “The Sophtware Slump” in May 2000. Back then, Grandaddy felt on the cusp of something: A band of underdogs pushing to reach for the sky from their modest existence in Modesto, Calif., a place like many other American towns and cities filled with those nurtured by its stasis and those seeking escape by any means. For Grandaddy – the rockers being Burtch, Dryden, Fairchild, Garcia, Lytle -- escape came in the form of these songs envisioned by Lytle, a magpie drawn to some shiny objects, but also others with less luster, like a seemingly antiquated keyboard. “Under the Western Freeway,” released in 1997, served as a trailhead with songs about solitude and communication as well as the eeriness of a meritocracy. “The Sophtware Slump” was a wide-angle progression with basement symphonics making for songs that somehow split the difference between meticulous and scruffy. But lyrically and thematically Lytle also took a big step with “The Sophtware Slump,” hinting at some of the cultural tangles the rest of us wouldn’t identify until years later. In an age of unprecedented connectivity, his songs spoke to significant solitude. As technology arced ever upward, he saw built-in obsolescence, as though he popped the lid off of next year’s model and found its expiration date.

He saw lovely vistas pocked by tire fragments, lush forests adapting to abandoned appliances and a lot of people disinterested in trying to make sense of it. The imagery was sad and funny, so the songs were, too.

Then, as now, Lytle was drawn to what he calls “the confusion and uncertainty of where we’re headed.” The contrast between anxiety and tension and pastoral serenity set up little twisting tempests. The songs on “The Sophtware Slump” weren’t prescient as much as they were attuned to cultural trends just starting to take shape. Lytle says “in order to make the cut, each song had to have the ability to stand alone lyrically. . . . My intention was shelf life.”

Grandaddy guitarist Jim Fairchild, who has played these songs thousands of times, wanted to know what the songs sounded like in this earliest form. He wanted to hear what he calls “the totality of that original vision. I wanted to hear THAT version of the album.

“With the scope of what Grandaddy has done and what Jason has done in his career, I thought there was room to pay greater attention to my favorite view of him, which is as a songwriter.”

This newly recorded “The Sophtware Slump” does just that. The songs’ skeletons are the same, but the bones dance differently. Slower songs like “Undearneath the Weeping Willow” make a natural transition to this sparer presentation. Greater revelations occur with the once louder songs like “The Crystal Lake” and “Chartsengrafs.” The effect at times is that of unfolding an origami dinosaur and refashioning it into a swan. The album’s sharp melodic sense isn’t dampened at all, but the words step forward, which only enhances the aspirational lift at album’s end, about aiming toward the sky.

Lytle states an aversion to nostalgia, likening it to a scene in which a group of workers on a freeway stand around and watch one guy doing everything. “I feel like I’m one of those guys standing around,” he says. “And I don’t like that feeling.”

But he admits 20 years lends the songs and his relationship to them a different perspective. “It was important to me to see this as being its own entity.”

So this new “The Sophtware Slump” isn’t a recontextualization of old songs as a stealth anthology for newcomers – “Introducing Jason Lytle!”

Nor is it a series of demos, rough sketches scattered like crumbs for the peckish completists. It’s more like a shadow sibling to a record that has entranced, beguiled and entertained fans for two decades, one that has seen its audience grow during that time; a record that has prompted young musicians to start their own bands to get out of their hometowns.

Barry says: It can be a strange experience hearing an album that's so well known turned on it's head and rerecorded entirely differently. Is it more shocking then, to hear the voice we know and love singing the same beautiful refrains over a much more restrained, oft minimalistic backdrop? It could easily be, but in the capable hands of Lytle, it's nothing less than astounding.