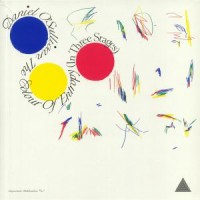 The Colour of Entropy (In Three Stages) is a collaboration between Belgium's Sleeperhold Publications and multi- instrumentalist  /  composer Daniel O’Sullivan (DOS) with imagery by French artist Felicia Atkinson. The title of this upcoming release might not unreasonably suggest decay and decomposition. The first few bars of Entropy instantly dispel any such forebodings. You find yourself, instead, transported to some ineffably gorgeous but nevertheless very earthly paradise. Entropy is over fourteen-minutes long, staged in three parts and, as anyone who knows and loves Daniel O’Sullivan will tell you, he is nothing if not mercurial.

Daniel O’Sullivan has achieved international acclaim writing, recording and performing with Grumbling Fur, Ulver, Sunn O))), Guapo, Miracle, Æthenor and the recent reincarnation of This Heat in the form of This Is Not This Heat. As for his solo work, DOS seems to mature with every recording he puts out. The Colour of Entropy (In Three Stages) features one lengthy suite broken down into three parts which meticulously melt into one other. Every section has its own character, taking us on a voyage of majestic beauty and uniquely ornamented melancholy. With an all-star cast of musicians DOS creates a auditive spectacle with an enduring lyrical poise and an elegant palette of sounds.

Felicia Atkinson’s colourful drawings adorn Entropy’s sleeve and one side of the wax. (All three tracks are featured on the record's A-side.) The experimental French musician, poet, and visual artist reacted in beautiful contrast to the musical output of DOS. Scrawls of colour, not quite figurative but highly suggestive messages of inner space. DOS’ music and Atkinson’s artworks, share a common ground. Views of the natural world through a lens that invokes almost alien qualities. Raising their little families while investigating a series of landscapes, both internal and external.