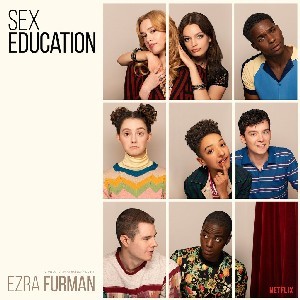 Following the success of last year’s “Twelve Nudes”, Ezra Furman returns with Sex Education OST, songs from season 1 and 2 of the hit Netflix TV show. The 19-track LP will be released via Bella Union and is available to download and on DSPs from Friday, 24th January, with a physical release on CD and vinyl to follow on 10th April.

When the makers of the hit Netflix series Sex Education told Ezra Furman, “We want you to be the Simon & Garfunkel to our The Graduate", they clearly recognised a kindred spirit. Who better to articulate all that awkwardness and alienation than Furman?

Sex Education is about Otis Milburn, a socially awkward high school student who lives with his sex therapist mother, Jean. In season 1 Otis and his friend Maeve Wiley set-up a sex clinic at school to capitalise on his intuitive talent for sex advice. In season 2, as a late bloomer Otis must master his newly discovered sexual urges in order to progress with his girlfriend Ola whilst also dealing with his now strained relationship with Maeve. Meanwhile, Moordale Secondary is in the throes of a Chlamydia outbreak, highlighting the need for better sex education at the school and new kids come to town who will challenge the status quo.

The Sex Education soundtrack gathers the original songs that Furman composed for the first series and the brand new second series, whilst adding tracks featured on the show that can be found on prior Furman albums such as “Perpetual Motion People” and “Transangelic Exodus”. Lining up alongside older cover versions of LCD Soundsystem’s ‘ I Can Change’ and Melanie’s ‘The Good Book’ is a new rendition of ‘Devil Or Angel’, The Clovers’ doo-wop jewel from 1956. It all adds up to a bumper 19-track set of Furman’s trademark enthusiastic emotional catharsis.

“Making music for a TV show was a new experience for me,” she says. “As a fan of many a high school comedy, for example The Breakfast Club and 10 Things I Hate About You, I knew how fun the music can be, and also how emotional. I wanted to rise to the challenge.”

Furman and her band recorded the new songs in between sessions for a “loud punk record,” namely the exhilarating “Twelve Nudes”, released by Bella Union in 2019. “I decided I’d use the Sex Education project as a place to put my tenderness, my sadness and longing,” she says. “The soft teenage feelings that every adult knows continue long after high school ends.”

For the first series, Furman was supplied with an extensive description of the show and the episode scripts. For the second series, she says, “They trusted us completely. They were like, ‘you know what to do’. I try to imagine what’s going to be on screen as a jumping-off point, but they don’t need songs that fit, they need songs of a high quality, that come from a real place. That’s why they wanted me, I guess. Also, I guess they noticed an exuberant vulnerability. I lay all my feelings out there.”

Given Furman’s personal experience at high school, having been closeted with regard to gender and sexuality, she wasn’t method-acting for a second. The new songs allowed her to reconnect to that past, but also the present, as teenager and adult. ‘Amateur’, for example. “I’m an amateur in my heart, and the show is about amateurs,” she says. “About bodies not yet fully formed, and hearts not yet hardened to the world.”

‘Every Feeling’ was inspired by a bad bout of depression: “I was so bored of having these feelings year after year, I just wanted to feel them all and get them over with.” ‘Care’ is afflicted by, “the noise of celebrity culture and politics.” Why can’t we just have, as Furman sings, “a world of love and care”? “That’s the dream I hang on to,” she says.

Songwriting, Furman concludes, “is a way of keeping tabs on what I care most about, the purest stuff, the matters of the heart that don’t expire. It’s what matters to teenagers, and revisiting the teenage perspective has been oddly centering for me. It’s a reminder of what’s important, and the emotional dramas that persist through life.”