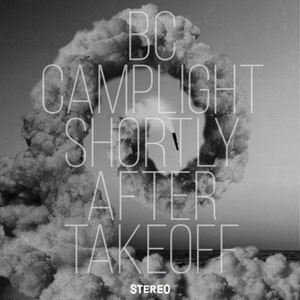 “This is an examination of madness and loss,” says Brian Christinzio, the inimitable force behind BC Camplight. “I hope it starts a long overdue conversation.”

Fired by his ongoing battle with mental illness, Shortly After Takeoff is the final, and finest, chapter of what Christinzio calls his “Manchester Trilogy”, following 2015’s “How To Die In The North” and 2018’s “Deportation Blues”. All three albums were created after the native Philadelphian had moved to Manchester. Like Deportation Blues, Shortly After Takeoff spans singer-songwriter classicism, gnarly synth-pop and ‘50s rock’n’roll, with Christinzio’s similarly distinctive, flexible vocal carrying a fearless approach to lyrical introspection, but the new album is a major leap forward in songwriting sophistication and lyrical communication.

“It’s important to stress that this isn’t a redemption story,” he says. “I'm a guy who maybe lives a little hard and I’m in the thick of some heavy stuff. But as a result, I think I've made my best record.”

The “heavy stuff” has come thick and fast for Christinzio. Just days before How To Die In The North was released, he was deported and banned from the UK because of visa issues. Estranged from his new home, his girlfriend and his dog, unable to promote his album and back home with his parents, Christinzio sunk deep into the dark. An Italian passport, care of his grandparents, eventually allowed him to re-settle in Manchester, but then just days before Deportation Blues was released, his father Angelo unexpectedly died.

“I went into a spiral that was worse than any time since my twenties,” he recalls. Hence the title Shortly After Takeoff: the feeling of being suddenly thwarted by what life throws at you. Making matters worse was a neurological disorder that returned after years in remission: “I see TV static, and it messes with how my brain interprets everything from sound to my own feelings.”

One way to process tragedy is comedy, which elevates Shortly After Takeoff to a heightened plateau, from grief-stricken vulnerability to armoured bravado, from the black dog of depression to gallows humour. None more so than ‘Ghosthunting’, which opens with an extraordinary (fabricated) passage of Christinzio doing a stand-up routine, centring on the memory of hallucinating his father’s ghost. “I want to drag the listener into this world and hopefully they question why they feel uneasy,” he explains.

“I also wanted to make a record totally free of whimsy and irony, that was just clear and open and honest. I don’t think you really heard the chaos in Deportation Blues, but in Shortly After Takeoff, I can hear I’m finding undiscovered places to go, only because I was so lost. Lyrically, I wanted people to hear and understand me this time. Before, if I would have written about my father dying, I would have made up some weird bullshit, like an analogy about a tree shedding leaves or something. That Brian is gone. I have a direct line to the listener now. I have a direct line to myself too. It’s a benchmark moment for me.”

Shortly After Takeoff ends with the gorgeously tender 93-second ‘Angelo’, “a little fleeting moment for my dad. I wanted his name on the album, and something that sounded like a goodbye. It ends with the drums, like a heartbeat stopping…”

That’s Christinzio and Shortly After Takeoff: his best, most honest, open and frequently heartbreaking record.

Andy says: Surely this must finally be the record which brings Brian Christinzio the attention he deserves. He is simply an incredible melodicist and creates tracks full of surprising twists and unusual turns. Dark, crazy but funnily inspirational lyrics are offset against the sweetest voice and catchiest songs you’ll hear all year. Just brilliant.