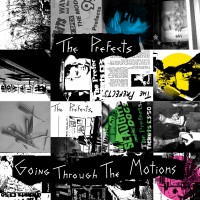 ‘Going Through The Motions’ is the first full-length vinyl collection of The Prefects studio recordings.Although a few tunes don’t stray from the general sounds of their time, there’s innovation and humour here. Escort Girls may be the first recorded forerunner of American hardcore. The Bristol Road Leads To Dachau hints at Joy Division’s later The Atrocity Exhibition. Taking it a step farther than Alternative TV’s How Much Longer with its deliberate dirge, Going Through The Motions, mocks punk expectation against an almost psychedelic haze.

Total Luck bears the early evidence of Lloyd’s lone-man confessional style, and Barbarella’s is a tongue-in-cheek tribute to their most-played local venue. Versions of The Modern Lovers’ She Cracked and the Prefects’ original 625 Lines were recorded live by Virgin on the final two nights of Manchester’s Electric Circus and later issued as a compilation with tracks by The Fall, The Buzzcocks, Joy Division and others. The Prefects refused release of their material, believing their first outing should be a studio recording, not a live track or two on a compilation. During the White Riot tour, members of Subway Sect, The Slits and The Prefects joined in on a live encore loosely based on Velvet Underground’s Sister Ray. Incredibly difficult to listen to, the song was bootlegged widely before eventually appearing on The Slits’ 1980 album of early demos in a 5’20” version called “No More Rock And Roll For You”.

Twenty years later, Vic Godard of Subway Sect edited a minute from the recording and released it on his Twenty Odd Years compilation. Two decades later, The Prefects have edited more than a minute from it and retitled it White Riot Tour. In another twenty years, it is hoped that the prolonged rite of ritual shortening of this song will leave no trace of it at all. For the record, it’s Robert Lloyd going “wooo-ooo” in the background, in what he says was an attempt to mimic the organ part from Sister Ray, which, listeners may note, is no longer being played. This is the opening salvo in the telling of Robert Lloyd’s career, which will include King Rocker: A film about Robert Lloyd & The Nightingales, by comedian and writer Stewart Lee, director Michael Cumming and Fire Films’ James Nicholls