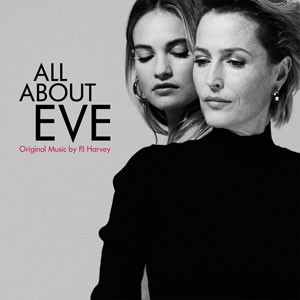 The 14-track album contains 10 original pieces of instrumental music, as well as two new songs written by Harvey and sung by Gillian Anderson and Lily James.

The physical release also includes demo versions of ‘The Sandman’ and The Moth’, performed by PJ Harvey.

On composing this score, Harvey says, “I have always loved stories, and so to compose music to support and enhance a story being told is a challenge I enjoy. I also love the freedom that working instrumentally can give me without the constraints of song form.”

“For All About Eve I chose to work with my long-time collaborator James Johnston as he has a soulfulness and sensitivity to his playing that inspires me. I also worked with Kenrick Rowe who has a versatility to his drumming I knew I could experiment with until I found what was right.”

All About Eve is the stage adaption directed by Ivo Van Hove.

Barry says: It's become more and more clear that PJ Harvey can easily put her mind to anything she deems necessary, and with great effect. The soundtrack for this adaptation of All About Eve is even more evidence, with perfect cues and touching sentimaentality oozing through every note. A beautifully performed and perfectly written piece. In-situ or not.