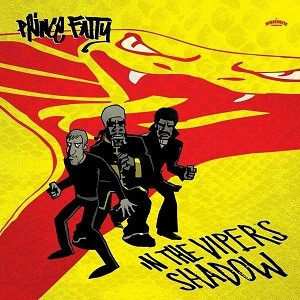 After dropping ‘The Clone Theory’ in 2015 production connoisseur Prince Fatty has been paving the way for something very special ever since. 2019 sees him release his second solo album ‘In the Viper’s Shadow’. Featuring a whole host of reggae and dub royalty, this project boasts a who’s who of global talent including the likes of Cornell Campbell, Tippa Irie, Big Youth, George Dekker, Shniece McMenamin, Earl 16, Winston Francis, Marcia Griffith and Horseman.

Renowned for flexing his studio muscle with some of the freshest and versatile dub sounds around, Prince Fatty’s blending old-school reggae with his own eccentric, futuristic twist, have turned industry heads for decades and ‘In the Viper’s Shadow’ is no exception. This album is 10 tracks of reggae goodness, produced to perfection in a melting pot of influences that span from multiple eras and stretch to just about every corner of the planet. Prince Fatty has worked with everyone from Lily Allen, Hollie Cook, Graham Coxon (Blur), Mungo’s HiFi, The Last Poets, The Skints, Gregory Isaacs to name a few.

After moving from Brighton to live in Sao Paulo, Los Angeles and Thailand, he’s taken inspirational sounds from across the globe and has built up a reputation of being one of the go-to producers of recent times. With a knack for selecting the perfect collaborators, whether it’s an up and coming artist or a genre-defining hero, his ability to showcase foundation laying percussion skills, mesmerising vocalists, bass-heavy triumphs and everything in between has resulted in some of the most expressive sounds around, and ‘In The Viper’s Shadow’ is the perfect example of his commitment to the cause.

Matt says: Modern reggae flagbearers Prince Fatty rarely write a bad riddim. And flanked by a who's who of voices from the scene, this is an essential set for lovers of global reggae.