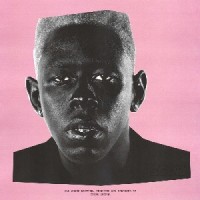 Much Anticipated New Album, On Columbia Records, From U.S. Hip-Hop/Rap Superstar, Tyler The Creator. "Igor" Is A X12 Song Album Released On LP Vinyl. Tyler, The Creator Releases His New Album. IGOR Marks His First Full-length Release Since His 2017 Grammy-nominated Album Flower Boy. The Album Follows Tyler Sharing Multiple Teasers Over The Last Two Weeks, Which Featured Clips Of Album Tracks "IGOR'S THEME," "WHAT'S GOOD," "A BOY IS A GUN*" And Most Recently, "NEW MAGIC WAND." Not To Mention The Legendary ‘EARFQUAKE’!

Millie says: Tyler the Creator has gone it again! His latest album ‘IGOR’ is finally here and I couldn’t be happier. Featuring ‘EARFQUAKE’ which I’ve overplayed a lot and still can’t get enough of, if you’re not up to date on this then where have you been, this is a highlight of the year for me.