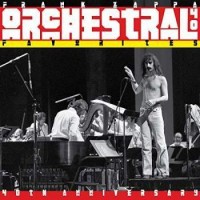 When Frank Zappa’s Orchestral Favorites was eventually released in 1979 as part of fulfilling his contract with his contentious former label, the album was dumped into the world along with several other titles without the legendary musician’s permission or quality control. It did not include liner notes or credits and the artwork and audio wasn’t approved by Zappa who publicly criticized it as not being up to his standards. As a result of not receiving any promotion, it was quickly relegated to the bargain bin shortly after its release.

Four decades later, in celebration of the long-beleaguered album’s 40th anniversary, the Zappa Family Trust is righting this wrong and presenting Orchestral Favorites with the audiophile detail and respect it deserves to commemorate the historical event that took place at UCLA’s Royce Hall in September 1975 where the compositions were recorded.

Frank ZappaCruising With Ruben & The Jets