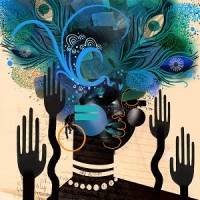 Tenesha the Wordsmith, who came to the fore on On The Corner’s 2018 release ‘Black Noise 2084’, has delivered a hard-cutting, gut-wrenching, and extremely moving spoken word album produced by Khalab that brings together different lines of black music – folkloric, jazz, and electronic dance – into an afro-futurist narrative with thunderous results. ‘Peacocks & Other Savage Beasts’, set for release on 30 August, lays bare difficult truths and projects the stories of hidden voices, with a warm and heartfelt delivery that envelops the soul.

The poems are dedicated to the intersection, the places where we contemplate identity, culture, trauma and love. ‘Peacocks & Other Savage Beasts’ is a place where they all meet. “I hope between these lines you find healing,” says Tenesha. “I hope your compassion for others grows. I hope you will make the decision you were afraid to make. I hope you will learn how to turn pain into power and purpose. Decide which type of beast you want to be and if you can’t make up your mind, watch the women…”

Originally from Oakland, California, “a place where revolutionaries are born,” Tenesha the Wordsmith originally began to fuse hip hop and poetry while living in Albany, New York, where she created her first collection ‘Body Of Work’. Her early influences have returned with features from beatboxers and vocalists that give the album a distinctly urban hip hop vibe.

Patrick says: After a standout contribution to Khalab’s ‘Black Noise 2084’ LP last year, Tenesha teams up with the producer once again, delivering poetic, polemic and emphatic spoken word over an array of Afro-futurist beats. Sex, love, race and equality are all explored by an artist operating at the cutting edge of music and poetry.