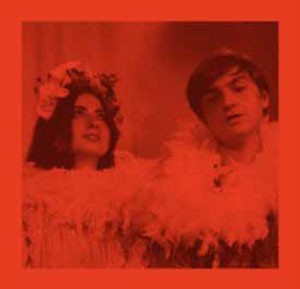 ‘Mantra Moderne’ is a stunning, contemporary masterpiece that fuses Anatolian Psychedelia, Brazilian Tropicalia, 60’s European pop and American jazz. A must for fans of Khruangbin, Portishead, Arthur Verocai, Goat, Caetano Veloso, Tom Ze, Os Mutantes, Cortex and co. The duo is formed of Kit Martin, who lives between London and France and plays all instruments on the album, and Merve Erdem, vocalist and multi-disciplinary artist from Istanbul, now based in London. This is the debut single from their debut album.

Dubbed by Kit and Merve as ‘lo-fi-hi-fi’ in reference to the high-end tube equipment that helped it find its way to 8-track cassette tape. The style owes its sound to narrow tape width, valve distortion, spring reverb, the mixture of high end gear with lo-fi equipment as well as a disregard to the norms of hi-fi studio techniques. All instruments were analogue and no samples were used. The instruments that are used range from tablas to darbukas, balalaikas to ouds, MS20 synths to Farfisa organs and a lot of cuica. The mixing techniques were done on-the-fly, tracking immediately to tape: compression, EQ, delay and reverb; meaning mixing could not be revisited!

Mantra Moderne was hugely influenced by Italian library soundtracks. The first backwards sound that occurs at 0.26 was an earlier recording of the track that was meant to have been recorded completely over, an example of the amount of mistakes that were present in the recording process that became desirable!

Kuytu is strongly influenced by Turkish Anatolian Rock and Azeri Mugham folk but also the works of someone very important to Kit and Merv, Vagif Mustafazadeh. The lyrics, written in Turkish are about a mysterious figure whose presence brings a heavenly love and joy into the poet’s life. However, his unexpected disappearance leaves a black sorrow in her heart.

Mine says: A very unique and somewhat irresistible blend of sounds, combining slow grooving bass lines, charming vocals and a good portion of jazz into a psychedelic haze. Delightful!