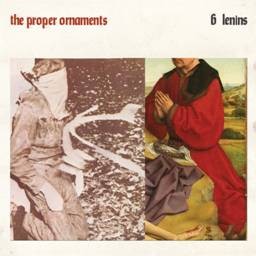 ‘Six Lenins’, the third album release from The Proper Ornaments, sees the band master their seemingly effortless but finely-wrought sound as their songwriting prowess refuses to plateau. Fresh from an US tour in Autumn last year, the London jangle pop group led by James Hoare (also of Ultimate Painting/Veronica Falls) and Max Claps (Toy) went into James' home studio in Finsbury Park, London and made their finest recordings to date on a newly-installed 16 track Studer machine - joined by Danny Nellis (Charles Howl) on bass and Bobby Syme (Wesley Gonzalez) on drums. Having escaped deep, twisting tunnels of illness, divorce and drug abuse to release their second record in January 2017, it's unsurprising they sound sunnier this time around. What their supremely melodic work suggests is a nonchalance or naivety but is in fact an expensively bought slice of coherence and clarity within a constantly shifting backdrop to their lives and landscapes. The band exists as an unassuming and resilient organism in a fiercely competitive, trashed environmental niche. Throughout their years of hard-edged music industry Darwinism, they've shown longevity and growth scuttling from the wreckage of their previous guitar bands to become one united organism. "We started writing new songs in the Summer. I was in bed recovering from hepatitis and very broken and tired so couldn't do anything else apart from playing guitar," says Max, "and the songs slowly started to appear. In August we realised we had five new songs each and free time, so we decided to record them. The actual recording only took two weeks and it was considerably easier than our previous recordings.” The speed with which “Six Lenins” was made suggests the two songwriters managed to keep a keen focus on what they wanted to achive, further finessing the balance of conflict and collaboration that lends their sweet, succinct tunes their nervous energy. Well-crafted songwriting and a controlled sonic despite a zealous analogue sensibility. The opener 'Apologies', sets out stridently and the mood and momentum, even as we weave through some more sombre moments, never dips before soaring with the Velvets-y propeller riff of live favourite 'In the Garden' to end the record.

The Proper OrnamentsWaiting For The Summer