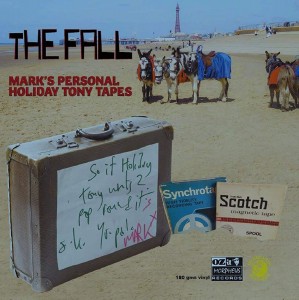 A mixture of Live and Studio out-takes that have never been out on vinyl before. Gatefold Sleeve, 180 gm Orange Vinyl. About five or six years ago Mark E Smith and I were going through some old audio recordings of The Fall both studio live and he invented a character called Holiday Tony who he said should be the person who should come round and listen to the tapes with us. He made a phone call to me telling me Holiday Tony lived in Prestwich and went to Blackpool on his holidays once a year with an old brown suitcase with recordings of The Fall inside. I even got a letter off Mark telling me when it was ok for Holiday Tony to go round and see him. Another idea of Mark’s about three years ago was to do a vinyl as a Non Record Store Day release in the weeks before Record Store Day and that every track should just be called The Holiday Tony Tapes. So here is the album.