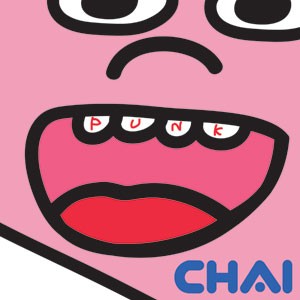 Japanese four-piece CHAI may worship at the altar of kawaii - their homeland’s culture of cute– but they’re not about to be pushed around by the idle bosses and the ignorant patriarchy. The ultra-concise garage-pop race of their debut LP PINK is about to be overhauled on their new album. CHAI are ready to light the fuse; CHAI are PUNK.

“’PUNK’ for us, of course, is not the genre of music,” say the band. “‘PUNK’ to us is to overturn the worn-out values associated with ‘kawaii’ or ‘cute’ created up until this point. ‘PUNK’ is a word that expresses a strong sense of self. To be yourself more, to become the person you truly want to be, to believe in yourself in every instance!”

At the core of CHAI’s music is the concept of "Neo-Kawaii." They outlined to concept in several interviews in 2018. In Pitchfork's Rising interview, it's described as "a move towards the embrace and celebration of human imperfection. 'Neo-Kawaii' is properly summarized on the single 'N.E.O.' from PINK, which directly comments on oppressive beauty standards, offering a list of supposed imperfections that translate to 'Small eyes/Flat nose/No shape/Fat legs!' CHAI seek to reclaim them as perfect."

On ‘GREAT JOB’ CHAI compare house work to ridding yourself from all negativity. “Some people look at house work as a negative duty but it’s actually a positive duty that represents a refreshed, new you.” Yuuki picks up on this: “Of course we want to continue show our style of positivity-meets-pop but in life there’s definitely times of sadness, times of frustration and even irritating moments that with ‘PUNK’, we want everyone to know can be used as energy to fuel the positivity from the negativity”.

Lead singer and keyboardist Mana reflects this mood, this search for something heavier, but still retaining their ultra-pop framework. Maybe it’s the huge success in their native Japan, or even their cult status in the UK, touring alongside Superorganism last year – whatever the reason, there’s a silent change. She adds: “We feel a stronger sense of self… we want to create music with deeper meaning, we want to release more of our individuality”.

This inner strength comes out in the music. If PINK was a plastic, hyper-bright introduction then PUNK is a deeper, less blinding but more impactful graduation. It’s the movement from vivid orange to slow-burning red. Drummer Yuna adds: “Compared with our first album, PUNK represents a more concentrated version of all of our individualities”. Or as guitarist Kana puts it: “Everything has a PUNCH!”

Yuuki crafted the irrepressible album sleeve, with a laughing girl bursting through a shell. The message, they say, is clear: “Hello, New Me!” You under-estimate CHAI at your peril.

Barry says: Chai is a fascinating middleground between clashing snarling punk (a-la Lovely Eggs etc), and the ever-increasing wave of synthy J-Pop. Brilliantly nuanced at points but swimming with the kind of carefree frivolity and funky grooves that make this an essential soundtrack to the summer.