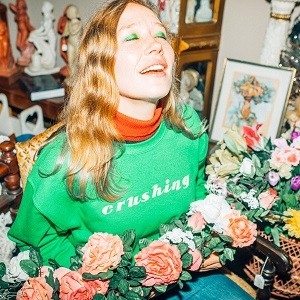 The second full-length album from Julia Jacklin, Crushing embodies every possible meaning of its title word. It’s an album formed from sheer intensity of feeling, an in-the-moment narrative of heartbreak and infatuation. And with her storytelling centered on bodies and crossed boundaries and smothering closeness, Crushing reveals how our physical experience of the world shapes and sometimes distorts our inner lives. The follow-up to her critically acclaimed 2016 debut Don’t Let the Kids Win, Crushing finds Jacklin continually acknowledging what’s expected of her, then gracefully rejecting those expectations. As a result, the album invites self-examination and a possible shift in the listener’s way of getting around the world—an effect that has everything to do with Jacklin’s openness about her own experience.

I really like this album, I worked hard on it and I really like listening to it. That's not usually how I feel after making something. I've finally come to accept that right now for me, making records is about capturing a time; who I am at that time, what I need to say in the best way I can say it, with minimal studio frills to cover it up. So I'm really happy to announce this one and ready for whatever things get thrown my way because of it. The cover was hard to figure out, seemed like I couldn't think of what kind of image would represent the music in the right way. Hard deadlines always make me more creative surprisingly. I was on tour in the states with my best bud Nick Mckk who takes a lot of my photos, he took my first album cover. We pulled off the highway in Pennsylvania and found a town called Krumsville. There was an antique store with a very friendly owner who let us run free inside. I got the jumper made the day before in NYC, same day I decided on the album name. I think it works.

Produced by Burke Reid (Courtney Barnett, Liam Finn) and recorded at The Grove Studios, Crushing sets Jacklin’s understated defiance against a raw yet luminous sonic backdrop. “In all the songs, you can hear every sound from every instrument; you can hear my throat and hear me breathing,” she says. “It was really important to me that you can hear everything for the whole record, without any studio tricks getting in the way.”

On the album-opening lead single “Body” - released last month - Jacklin proves the power of that approach, turning out a mesmerizing vocal performance even as she slips into the slightest murmur. A starkly composed portrait of a breakup, the song bears an often-bracing intimacy, a sense that you’re right in the room with Jacklin as she lays her heart out. And as “Body” wanders and drifts, Jacklin establishes Crushing as an album that exists entirely on its own time, a work that’s willfully unhurried.

And whilst a moving and complex listen, Crushing unfolds with an ease that echoes Jacklin’s newfound self-reliance as an artist. “With the first album I was so nervous and didn’t quite see myself as a musician yet, but after touring for two years, I’ve come to feel like I deserve to be in that space,” she says. Throughout Crushing, that sense of confidence manifests in one of the most essential elements of the album: the captivating strength of Jacklin’s lyrics. Not only proof of her ingenuity and artistic generosity, Jacklin’s uncompromising specificity and infinitely unpredictable turns of phrase ultimately spring from a certain self-possession in the songwriting process.

Barry says: It's no surprise that 'Crushing' shares a producer with the most recent Courtney Barnett opus, with it's infectious hooks and Jacklin's singular vocal talent shining through in a rich, sumptuous sea of satisfyingly crunchy guitar and thick percussion. All of this merely highlights Jacklin's unmistakable ear for melody and perfectly constructed melodic indie-rock. This is an absolute winner, and an undoubtable career high.