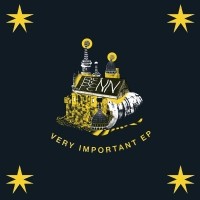 June 2018, Amsterdam, NL: 12 months ago we concluded a series of experiments with a test subject named Ben Penn. A year on, we decided to repeat this experiment at his Tilburg base. Once again, the results were startling...
.
After being provided with a sizeable dose of an enhanced and notably stronger derivative of 4-Ho Met (codenamed ST011), Penn not only reported intense hallucinations but also enhanced music production capabilities. With the aid of electronic instruments and hardware, he worked quickly, producing both his trademark “higher level inter-dimensional funk” and compositions that defied our previous expectations.

During the early stages of his ST011 experience, Penn completely ignored the provided Rhythm Composer and instead crafted a colourful, humid, jazzy and beat-free track entitled “Nix”, which boasted loose and fluid synthesizer motifs. As his hallucinatory experience intensified, Penn giddily tapped out tropical rhythms on the provided beat-making device, smothering them in alien electronics and sticky melodies. When we asked what this devilishly good cut was called, he simply replied: “Not Important”.

As the test went on and the most intense symptoms died down, Penn was much like his old self. Before the ST011 wore off completely, he was able to finish two examples of his trademark “inter-dimensional funk”: the skewed, introspective, bassline-driven wooziness of “Ben” and the mazy, kaleidoscopic goodness of “People”. The latter composition was particularly potent and ear pleasing, suggesting that his ST011 experience had finished on an intense high

Patrick says: More synthetic 4/4 funk from Young Marco's entirely psychedelic Safe Trip imprint. This time round, Ben Penn hits us with a vibrating beatless jam, a tropical tonker and a pair of saucer-eyed steamers (check that bassline on "Ben"!). Grab a copy and rock a dance floor.

PanoptiqueHow Did You Find Me?