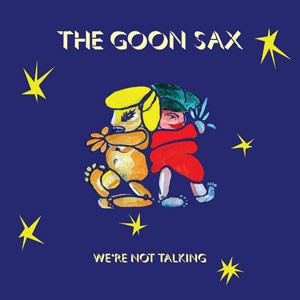 The Goon Sax are James Harrison, Louis Forster and Riley Jones from Brisbane, Australia. Still in high school when they made their first album Up To Anything in 2016, their brand of awkwardly transcendent teenage guitar pop took earned them wide-spread critical acclaim.

For album number two, they flew to Melbourne to record with James Cecil and Cameron Bird, respectively former/current members of Architecture In Helsinki, and 'We're Not Talking' shows how much can change between the ages of 17 and 19. It's a record that takes the enthusiasms of youth and twists them into darker, more sophisticated shapes. Relationships are now laced with hesitation, remorse, misunderstanding and ultimately compassion.

Drummer Riley Jones really comes to the fore here, joining Louis and James in singing lead and writing songs for the first time, making the band the musical equivalent of an equilateral triangle (the strongest shape in physics).

Delivering brilliantly human and brutally honest vignettes of adolescent angst, The Goon Sax brim with personality, charm and heart-wrenching honesty. 'We’re Not Talking' is a record made by restless artists, defying expectations as if hardly noticing, and its complexity makes 'We're Not Talking' even more of a marvel.

Barry says: 'Up To Anything' was a revelation when it came in, brilliantly clever and melodic, but gritty and poetic at the same time. 'Were Not Talking' continues that legacy but with a bit more of a world-wise tilt, swapping out some of the major key melodies and psychedelic progressions for more solemn interludes, focused more on the nuances of songmanship than the youthful power of the debut. A brilliant progression from this Australian trio, and yet another reason why we'll continue to love The Goon Sax.