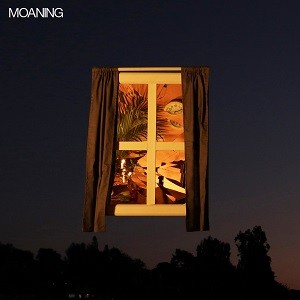 Moaning is a band defined by its duality. The abrasive, post punk trio comprised of Sean Solomon, Pascal Stevenson, and Andrew MacKelvie, began nearly a decade after they met in L.A.’s DIY music scene. Their debut album comes born out of the member’s experiences with love and distress, creating a sound uniquely dark and sincere. Although the band is just breaking out of their infancy, Moaning’s sleek and cavernous tone emphasizes the turmoil of the era they were born into. One where the endless possibility for art and creation is met with the fear and doubt of an uncertain future.

The trio began regularly frequenting DIY institutions like The Smell and Pehrspace, eventually selling out dozens of their own shows at both venues with their first few bands. Solomon recalls, after a brief hiatus from playing together, Moaning’s conception came when he sent Stevenson and MacKelvie the first demo for “Don’t Go,” setting the tone for the impulsive songwriting that would follow.

The three fleshed out Solomon’s primitive recordings, adding in MacKelvie’s heavy syncopated drumming, and Stevenson’s melodic driving bass and synth parts, capturing each member’s personality in their sparse and fuzzed out tracks. Like many of their previous collaborative projects, Moaning forces pain up against pleasure, using the complexity of personal heartbreak to inform the band’s conflicted sound. The band eventually landed on the apt moniker Moaning, admiring the ambiguity the name held and hoping to reference both an intimate wail and an anguished scream

Laura says: Sub Pop really are on a roll at the moment! LA band Moaning bring us some doomy, abrasive guitar tunes, with skittering drums and rumbling fluid bass lines that nod to early 80s post punk. Add to that dead-pan vocals and big hooks and they've got me sold!

Girls In SynthesisThe Rest Is Distraction