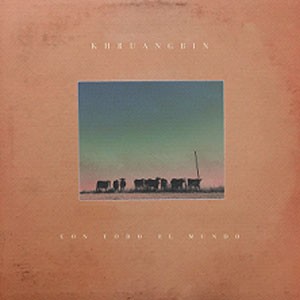 Comprising of Laura Lee on bass, Mark Speer on guitar, and Donald “DJ” Johnson on drums, Khruangbin’s sounds are rooted in the deepest waters of world music infused with classic soul, dub and psychedelia. Their 2015 debut album "The Universe Smiles Upon You" was heavily influenced by 60’s and 70’s Thai cassettes the band listened to on their long car journeys to rehearsal in the Texan countryside. "Con Todo El Mundo" takes inspiration not just from South East Asia but similarly underdiscovered funk and soul of the Mediterranean and the Middle East, particularly Iran. The sultry and humid grooves of their debut are alive and well, enhanced by a little extra funk, the lightly spiced flavours of Middle Eastern pop and maybe a little strung out Americana a la Cowboy Junkies. The hefty breaks on cuts like "Lady & Man" and "Maria Tambien" have that "Jungle Fever" toughness, while the woozy "August 10" and "Como Te Quiero" are classic examples of Khruangbin's languid style. "Shades Of Man" colours the trio's palette with a little country soul, while "A Hymn" preaches a gospel out of Death Valley. The perfect sophomore offering, "Con Todo El Mundo" retains all the tasty ingredients of the original and blends them with a new batch of exotic flavours.

Patrick says: Shop faves Khruangbin continue their stroll through mellifluous melody with sophomore offering "Con Todo El Mundo", swapping the Thai tonalities of their debut for some distinctly Middle Eastern flavours. Every bit as languid and lovely as their debut, this new LP is different enough to show progression whilst remaining reassuringly familiar.