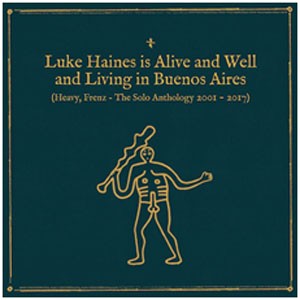 Having played with The Servants in the late 1980s, Luke Haines carved a unique niche for himself in the 1990s with witty lyrics, wry humour and some stellar tunes with The Auteurs and other acts (Black Box Recorder, Baader Meinhof).

By 1999, feeling aghast at the state of the Brit Rock scene in the UK, Luke decided to “start a righteous solo trip”, having been commissioned to write the soundtrack for the film Christie Malry's Own Double Entry (2001). Sticking with Virgin Records, Luke then unveiled his first solo album proper, The Oliver Twist Manifesto, before fronting a new-look Auteurs for Das Capital.

In due course, Luke switched labels to indie Fantastic Plastic for Off My Rocker At The Art School Bop (2006), followed in 2009 by 21st Century Man. Since then, he’s curated a string of imaginative, amusing and always worthwhile albums for Cherry Red Records.

Alive And Well… is the first-ever anthology of Luke’s solo work, cherry-picking musical highlights from each of his long players as well as a smattering of B-sides, radio sessions, rarities and – on Disc 4 – a raft of previously unissued material.

With sleeve-notes by Luke himself, Alive And Well… is a very personal statement spanning the last two decades of the musical life of Luke Haines.