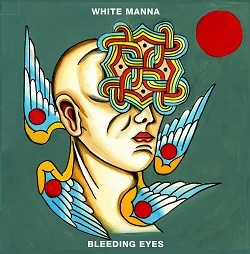 Following on from an incredible one-two brace of releases on Holy Mountain, a release on Valley King, a limited Live album (Live Frequencies) on Cardinal Fuzz, and then their last sonic attack (PAN) on Cardinal Fuzz in 2016, White Manna release their new studio album as part of a joint venture between Cardinal Fuzz and Agitated Records.

Unleashed at the end of September in Europe to tie in with a UK/EU tour that features another sure to be main stage storming appearance at Liverpool Psych Fest, Bleeding Eyes is the sound of White Manna soaring and searing with riffs and grooves that float their own take on SIKE ROCK! To a higher plane. The 8 tracks herein deliver serious motorik action along the way, with some lo-fi pop glaze over the top of solid rhythmic pummel. Riffs? You got it, great rafts of guitar interplay blitzing your ears in a dronesome scree, ricocheting through space and time to transport you to a sonic enlightenment.

Recorded and mixed at El Studio San Francisco, Ca and The Compound, Manila, Ca by Phil Manley and White Manna.

Side B
Speed Dagger
English Breakfast
You Are The Movie
Freak