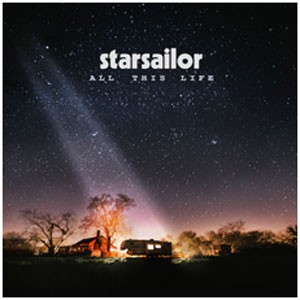 Starsailor burst onto the scene in 2001 when their single Fever earned them the title of "Britain's best new band". The band was formed at Wigan and Leigh Music College by music students James Walsh (vocals/guitar), James Stelfox (bass), and Ben Byrne (drums). Later saw the arrival of keyboardist Barry Westhead, who cemented their sound. In April 2000, after seeing their first London show (at the Heavenly Social) the NME wrote: "One live encounter was enough to convince many sceptics that here was a band who were genuinely special, blessed with a singer whose voice thrummed like an emotional telegraph wire, that swerved the pitfalls of indie melancholia and were clearly in love with rock 'n' roll and all its possibilities." Their debut album Love Is Here featuring the Top 10 single Alcoholic, reached Number Two in the UK Album Charts in October 2001, after receiving great critical acclaim and went on to sell over half a million copies in the UK alone.

Phil Spector was originally appointed to produce the band's second album, Silence Is Easy. The resulting recording sessions at London's Abbey Road were short-lived. Their collaboration proved to be frustrating, with Spector and the band butting heads on several issues. Only two tracks that Spector produced made the album, Silence Is Easy (another Top 10 single for the band) and White Dove. Starsailor co-produced seven of the other tracks with former Elbow and Doves producer, Danton Supple. John Leckie (The Stone Roses & Radiohead) also produced Shark Food. Silence Is Easy reached Number Two in the UK Album Chart and soon went Gold. The band have enjoyed more than their fair share of prestigious gigs, supporting the likes of The Rolling Stones, The Police, The Killers, and U2, and have sold over 3 million albums worldwide. They decided to take a break in 2009 to explore other projects and now return in 2017 sounding re-energised and with an outstanding new studio album - their fifth ‘All This Life’. The band played a packed Big Top at this year’s Isle Of Wight Festival to an ecstatic crowd and debuted a new track from the forthcoming album. They are also confirmed shows at British Summer Time at Hyde Park alongside Phil Collins, Blondie, New Power Generation and more as well as Hope & Glory Festival in Liverpool.

ElbowAsleep In The Back - Vinyl Reissue