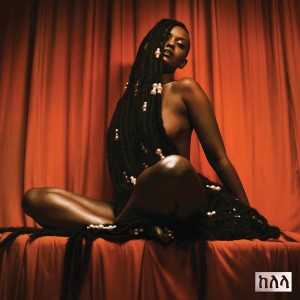 With great anticipation, Kelela's debut album emerges as an epic portrait of an artist spanning the past and future of R&B. In her hands, however, the genre knows no boundaries and so Take Me Apart exists as an absolutely singular and fearless addition to a canon of recent classics. From her very earliest work, honesty and vulnerability have been cornerstones of Kelela's art - even when clad in the armor of the avant-garde electronics she so deftly inhabits - and Take Me Apart sees her double down on both the emotional intensity and resonance of her message as well as the sonic seeking she is renowned for.

On 2015's acclaimed Hallucinogen EP, Kelela swept listeners along in the rush of ecstasy and the melancholic vapor trail of a hopeful, but ultimately doomed liaison. Hallucinogen would prove to be a turning point, and The New York Times would name it's single, "Rewind", one of the "25 Songs That Tell Us Where Music Is Going". The EP's oversized impact would ignite a period of kinetic worldwide live shows culminating in Kelela crisscrossing the globe on tour with The xx. In parallel with this, 2016 and early 2017 would see Kelela grace a handful of crucial records as a feature vocalist - from longtime ally Solange's majestic A Seat At The Table, to Danny Brown's immense Atrocity Exhibitionand most recently, the star-studded Humanz from Gorillaz. These appearances would be tantalizing signs leading the way to Take Me Apart.

Amplifying the ideas explored on Hallucinogen, here Kelela treats relationships and their effects like a Matryoshka doll, unveiling layer after layer to find herself at the center. Expressing an honest vision of how we navigate dissolving ties with each other and yet remain sanguine for the next chance at love, the emotional ricochet is traced across the album's narrative. Take Me Apart stands not only as an intensely personal chronicle, but also a defiant and turbulent statement direct from Kelela; "Despite it being a personal record, the politics of my identity informs how it sounds and how I choose to articulate my vulnerability and strength. I am a black woman, a second-generation Ethiopian-American, who grew up in the 'burbs listening to R&B, Jazz and Björk. All of it comes out in one way or another."